Getting a Leg Up on the Jobs Front

Getting a Leg Up on the Jobs Front 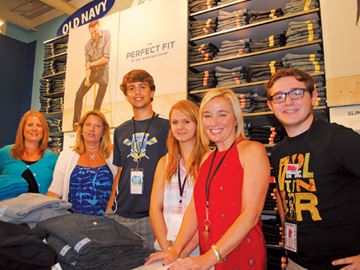 Hayley Fox has her eye on a career in education, not retail, but she also knows it costs an arm and a leg to go to university these days.

She’s got a leg up on the competition, thanks in part to the skills she’s learning through the John Howard Society of Niagara and Old Navy at the Pen Centre.

Hayley has spent the summer working at clothing store H&M at the mall, doing a two-month co-op through the John Howard Jobs for Youth summer program. That program helps young people who face barriers to employment with skills such as interviewing and writing resumes while lining up employers to hire them.

She was also one of 10 teens from the program selected to spend the day at Old Navy on August 13, getting hands-on training on such things as dressing mannequins, cashing out clients and arranging displays.

The annual event, known as Camp Old Navy, has seen the store pair up with organizations such as the Boys and Girls Club and the YMCA in the past. This year was the first time it’s been held in partnership with the John Howard Society, and saw youth from Welland, Pelham, Fort Erie, Port Colborne, St. Catharines and Lincoln taking part.

“I think it’s pretty cool,” Hayley said of her Old Navy training. “It’s a new experience and it’ll help me to get a job to save money.”

“It’ll definitely help me in the future,” he said. “Schools don’t teach enough about that kind of thing.”

Caroline Graham, youth services supervisor with John Howard, said weekly workshops her organization holds for the youth also involves such things as conflict resolution and self-esteem. “It’s general life skills that will help them beyond just jobs,” she said.

Krista Sanders, general manager of the Old Navy store, said her store took on three of the co-op students for paid placements over the summer. Her employees also volunteered to help out training the teens through Camp Old Navy — an extension of the philosophy of Old Navy owner The Gap to give back to the community.

“We are very committed to getting involved,” said Sanders.

A graduation celebration for the teens in the John Howard summer jobs program was held on Friday, August 22 at the Holiday Inn and Suites hotel in St. Catharines.

Watch the video of the students during their summer experiences here.