There are currently 52 John Howard Society branches and 10 provincial offices across Canada; each with the goal of ameliorating the criminal justice process. Today the Society offers programs that target the reduction of recidivism and the prevention of delinquent behaviors among those who may be at risk of offending.

In 1949, the John Howard Society of Niagara was formed. 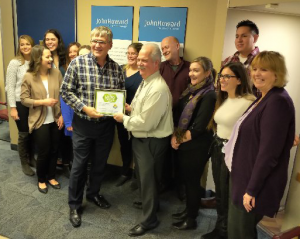 The John Howard Society of Niagara (JHSoN) is a non-profit organization committed to the development and delivery of programs that reduce the social, economic and personal costs of crime. The Society is dedicated to helping all people who have been in conflict with the law or who face imminent risk of coming into conflict with the law through service, education and community programs. The organization is governed by a volunteer Board of Directors whose mission is to provide effective, fair and humane responses to crime and its causes. Today, the JHSoN offers various programs and services for corrections and employment related needs. With three sites across the Niagara Region; in Fort Erie, Welland and St. Catharines, the John Howard Society of Niagara currently has over 70 employees. Funding is provided by Service Canada, Ministry of Community Safety and Corrections, Ministry of the Attorney General, Department of Justice, Ministry of Training, Colleges and Universities, Ministry of Children and Youth Services, Ontario Trillium Foundation and Niagara Prosperity Initiative.

John Howard was born in Lower Clapton, London in 1726.  His father, also John, was a wealthy upholsterer in the city. When his mother died when he was five years old John was sent to live in Bedfordshire, some forty miles from London, where his father owned property.  A strict disciplinarian with strong religious beliefs, his father sent the young John to a school in Hertford and then on to John Eames’s Dissenting Academy in London.

After finishing school, John was apprenticed to a wholesale grocer to learn various business methods, but he was unhappy.  When his father died in 1742, he was left with a considerable inheritance but no true vocation.  His strong faith and quiet, serious disposition meant he had little desire for the fashionable endeavors of an English aristocratic lifestyle.  In 1748, he left England for a grand tour of the continent but returned several years later and married an older nurse who had helped him recover from illness.

Following the 1755 Lisbon earthquake, John set out for Portugal; travelling on the Hanover, which was subsequently captured by French privateers.  He was imprisoned in Brest, France for six days before being transferred to another prison on the French coast.  Later, John was grimly exchanged for a French officer held by the British, and he quickly travelled to the Commissioners of Sick and Wounded Seamen in London to seek help on behalf of his fellow captives.  It is widely believed that this personal experience generated what would become John Howard’s lifelong interest in prisons and their conditions.

Having returned from France, he settled again in Bedfordshire to live on a 200-acre estate which he had inherited from his grandparents.  He spent the next two years building properties and trying to improve the lives of the tenants living on his land.  A later survey of Cardington, Bedfordshire in 1782 further revealed that John Howard was also paying for the teaching of 23 children.  He was elected a Fellow of the Royal Society in May of 1756.

John Howard viewed his work as humanitarian.  His detailed proposals for improvements were designed to enhance the physical and mental health of the prisoners and the security and order of the prison. His recommendations pertaining to such matters as the prison location, plan and furnishings, the provision of adequate water supply, and prisoner’s diet promoted hygiene and physical health.  Recommendations concerning the quality of prison personnel, rules related to the maintenance of standards of health and order and an independent system of inspection, reflect the need for prison personnel to set a moral example. (Terry Carlson, 1990)

In April 1777, Howard’s sister died leaving him £15,000 and her house. He used this inheritance and the revenue from the sale of her home to further his work on prisons. In 1778, he was again consulted by the House of Commons, who were this time inquiring into ‘hulks’, or prison ships.  Two days after giving evidence, he was again travelling throughout Europe, beginning this time in the Dutch Republic.

By 1784, Howard calculated that he had travelled over 68,000 km visiting prisons. He had been awarded an honorary LLD by the University of Dublin and had been given the Freedom of the City of London.  His fourth and final tour of English prisons began in March 1787 and two years later he published The State of the Prisons in England, and An Account of the Principal Lazarettos of Europe.

John Howard’s final journey took him into Eastern Europe, and into the Crimea, then Russia. While at Kherson, in what is now the Ukraine, Howard contracted typhus on a prison visit and died shortly after.  He was buried on the shores of the Black Sea in a walled field at Dophinovka, Ukraine.  Despite his wishes for a quiet funeral without any pomp and ceremony, the event was elaborate and attended by many, including the Prince of Moldavia.  In February of 1790, when news of his death reached England, several John Howard halfpennies were struck in commemoration.  Howard also became the first civilian to be honored with a statue in St. Paul’s Cathedral, London.  Other statues was also erected in Bedfordshire, as well as one in Kherson. Additionally, his bust is featured in the architecture of a number of Victorian prisons across the United Kingdom, such as the main entrance at Shrewsbury.